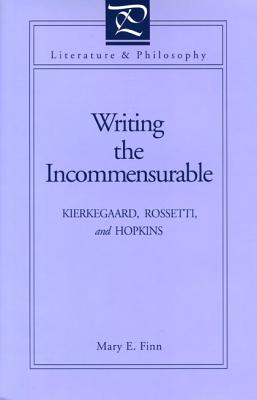 Writing the Incommensurable: Kierkegaard, Rossetti, and Hopkins (Literature and Philosophy)

An analysis of two major religiously inspired writers from a Kierkegaardian perspective. Writing the Incommensurable studies how the threat posed by the absence of an immanent God is explored in the works of Soren Kierkegaard, Christina Rossetti, and Gerard Manley Hopkins.

Mary Finn erects a theoretical framework in each chapter based on a pseudonymous work of Kierkegaard. In these pseudonymous works, Kierkegaard uses the discourses of philosophy, theology, and literature to plot the complicated path of a religious writer whose own impulse to write complicates if it does not compromise the religious vision she or he wants to communicate.

The book is organized according to four Kierkegaardian categories: anxiety, lyric voice, repetition, and radical choice. All four are responses to what Kierkegaard calls the incommensurable, the unnegotiable gap between subjectivity (and God) on the one hand and "actuality" on the other. This gap plagues the writer-believer while also enabling writing. In what dilemma, then, does a religious poet find herself or himself when out of the depths of personal doubt, lack of understanding, and religious inadequacy comes a literary success? Or is this dilemma avoided by paradoxically refiguring failure as a measure of success, and if so, can such a refiguring ever be fully trusted? As the notion of the subjective "self" acquires preeminence in the nineteenth century, the particularized "writing self" is the entity Kierkegaard, Hopkins, and Rossetti fight to get beyond as religious believers. The futility of such an attempt nonetheless results in a peculiar success: there is the writing itself, material evidence that the fight occurred, imbued with the pathos and beauty of all monuments erected to lost causes."

Writing the Incommensurable: Kierkegaard, Rossetti, and Hopkins (Literature and Philosophy)