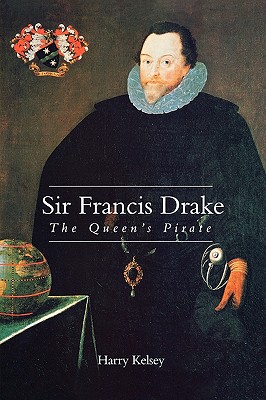 In this lively and engaging new biography, Harry Kelsey shatters the familiar image of Sir Francis Drake. The Drake of legend was a pious, brave, and just seaman who initiated the move to make England a great naval power and whose acts of piracy against his country's enemies earned him a knighthood for patriotism. Kelsey paints a different and far more interesting picture of Drake as an amoral privateer at least as interested in lining his pockets with Spanish booty as in forwarding the political goals of his country, a man who became a captain general of the English navy, but never waged traditional warfare with any success.

Drawing on much new evidence, Kelsey describes Drake's early life as the son of a poor family in sixteenth-century England. He explains how Drake dabbled in piracy, gained modest success as a merchant, and then took advantage of the hostility between Spain and England to embark on a series of daring pirate raids on undefended Spanish ships and ports, preempting Spanish demands for punishment by sharing much of his booty with the Queen and her councillors. Elizabeth I liked Drake because he was a charming rogue, and she made him an integral part of her war plans against Spain and its armada, but she quickly learned not to trust him with an important command: he was unable to handle a large fleet, was suspicious almost to the point of paranoia, and had no understanding of personal loyalty. For Drake, the mark of success was to amass great wealth, preferably by taking it from someone else and the primary purpose of warfare was to afford him the opportunity to accomplish this.