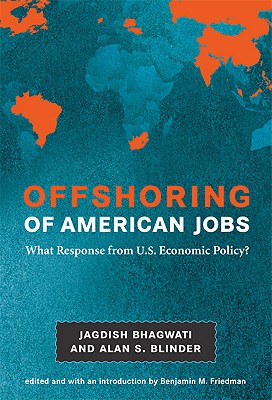 Two leading economists discuss a range of issues relating to the "offshoring" of American jobs, from free trade to unemployment levels.

It is no surprise that many fearful American workers see the call center operator in Bangalore or the factory worker in Guangzhou as a threat to their jobs. The emergence of China and India (along with other, smaller developing countries) as economic powers has doubled the supply of labor to the integrated world economy. Economic theory suggests that such a dramatic increase in the supply of labor without an accompanying increase in the supply of capital is likely to exert downward pressure on wages for workers already in the integrated world economy, and wages for most workers in the United States have indeed stagnated or declined. In this book, leading economists Jagdish Bhagwati and Alan S. Blinder offer their perspectives on how the outsourcing of labor and the shifting of jobs to lower-wage countries affect the U.S. economy and what, if any, policy responses are required. Bhagwati, in his colorful and pithy style, focuses on globalization and free trade, while Blinder, erudite and witty, addresses the significance of labor market adjustment caused by trade. Bhagwati's and Blinder's contributions are followed by comments from economists Richard Freedman, Douglas A. Irwin, Lori G. Kletzer, and Robert Z. Lawrence. Bhagwati and Blinder then respond separately to the issues raised. Benjamin Friedman, who edited this volume (and organized the symposium that inspired it), provides an introduction.