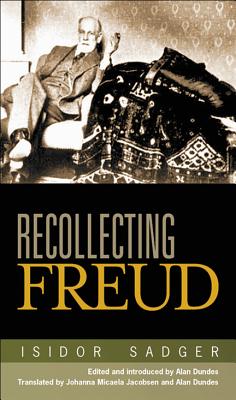 Available here for the first time in English, this eyewitness account by one of Freud's earliest students has been rediscovered for twenty-first century readers. Isidor Sadger's recollections provide a unique window into the early days of the psychoanalytic movement the internecine and ideological conflicts of Freud's disciples. They also illuminate Freud's own struggles: his delight in wit, his attitudes toward Judaism, and his strong opinions concerning lay, non-medical analysts.
As a student, Sadger attended Freud's lectures from 1895 through 1904. Two years later Freud nominated Sadger to his Wednesday Psychological Society (later called the Viennese Psychoanalytic Society). Sadger, however, was not part of Freud's inner circle, but more a participant observer of the early years of the psychoanalytic movement and of Freud as teacher, therapist, and clinician.
Sadger was considered one of the most devoted followers of Freud and hoped to become one of Freud's "favorite sons." At the First Psychoanalytic Congress held in Salzburg in 1908, Sadger was chosen to be one of the principal speakers along with Freud, Jones, Alder, Jung, Prince, Rifkin, Abraham, and Stekel, an honor that bespeaks Sadger's early role in the movement. But Freud and many of his disciples were also openly critical of Sadger's work, calling it at various times overly simplistic, unimaginative, reductionist, orthodox, and rigid.
In 1930 Sadger published his memoir, "Sigmund Freud: Personliche Erinnerungen." With the rise of Nazism and World War II, the book became lost to the world of psychoanalytic history. Recently, Alan Dundes learned of its existence and mounted a search that led him around the world to one of the few extant copies in a research library in Japan. The result of his fascinating quest is "Recollecting Freud," a long-lost personal account that provides invaluable insights into Freud and his social, cultural, and intellectual context."