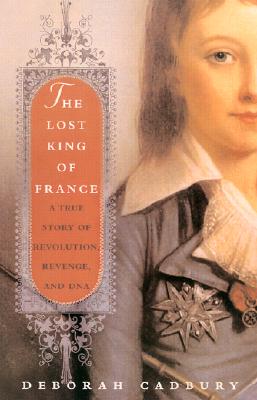 The Lost King of France: A True Story of Revolution, Revenge, and DNA

Royalty, revolution, and scientific mystery---the dramatic true account of the fate of Louis XVII, son of Marie Antoinette, and an extraordinary detective story that spans more than two hundred years.
Louis-Charles, Duc de Normandie, enjoyed a charmed early childhood in the gilded palace of Versailles. At the age of four, he became the dauphin, heir to the most powerful throne in Europe. Yet within five years he was to lose everything. Drawn into the horror of the French Revolution, his family was incarcerated and their fate thrust into the hands of the revolutionaries who wished to destroy the monarchy.
In 1793, when Marie Antoinette was beheaded at the guillotine, she left her adored eight-year-old son imprisoned in the Temple Tower. Far from inheriting a throne, the orphaned boy-king had to endure the hostility and abuse of a nation. Two years later, the revolutionary leaders declared Louis XVII dead. No grave was dug, no monument built to mark his passing.
Immediately, rumors spread that the prince had, in fact, escaped from prison and was still alive. Others believed that he had been murdered, his heart cut out and preserved as a relic. As with the tragedies of England's princes in the Tower and the Romanov archduchess Anastasia, countless "brothers" soon approached Louis-Charles's older sister, Marie-Therese, who survived the revolution. They claimed not only the dauphin's name, but also his inheritance. Several "princes" were plausible, but which, if any, was the real heir to the French throne?
The Lost King of France is a moving and dramatic tale that interweaves a pivotal moment in France's history with a compelling detective story that involves pretenders to the crown, royalist plots and palace intrigue, bizarre legal battles, and modern science. The quest for the truth continued into the twenty-first century, when, thanks to DNA testing, the strange odyssey of a stolen heart found within the royal tombs brought an exciting conclusion to the two-hundred-year-old mystery of the lost king of France.

Title: The Lost King of France: A True Story of Revolution, Revenge, and DNA

The Lost King of France: A True Story of Revolution, Revenge, and DNA