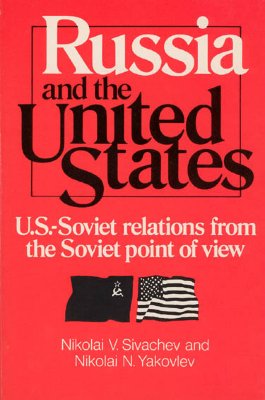 Russia and the United States (U.S.-Soviet relations from the Soviet point of view)

"Russia and the United States" an account of American-Russian relations written for an American audience by Soviet historians represents a novel venture for both scholarship and publishing. Its often startling perspective on American foreign policy is required reading for anyone wishing to understand the increasingly troubled relations between the two nations.
Sivachev and Yakolev trace the course of the U.S.-Russian relations from the years preceding the American Revolution to the 1970s, when human rights issues began to cause friction. Those relations, the authors believe, were characterized by America's repeated failure to take advantage of opportunities to improve them. Recognizing the controversial nature of the book, Sivachev said in an interview with the "New York Times" "We did not set out to please the American reader, nor did the University of Chicago Press ask us to. On the contrary, they recommended that we should feel free to present our own views."
"Scholars and students of American foreign policy . . . are likely to be alternatively interested, intrigued, angered, and sometimes illuminated by some of the interpretations found in this work." "Perspective "
"An American reader should not prejudge this book as simply another dreary contribution to the rhetoric of Soviet propaganda. It is more than this. The book is an expression of a view of the world that is truly and strikingly different from an American one and it is important to understand that it is a theory of reality that is shared by most, if not all, Soviet intellectuals who study America and its foreign policy. It is not enough simply to establish the inaccuracies and misrepresentations contained in such a view. One must go further and understand that such a view of reality is sincerely deeply held and that it is a part of a larger belief system that gives the authors' scholarly work coherence and meaning." "Boston Sunday Globe
""

Title: Russia and the United States (U.S.-Soviet relations from the Soviet point of view)

Russia and the United States (U.S.-Soviet relations from the Soviet point of view)