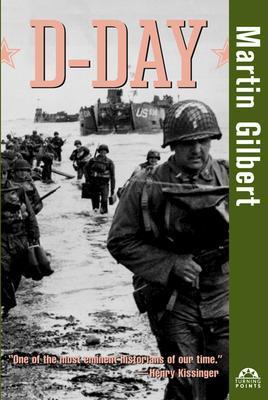 A preeminent historian examines World War II's turning point On June 6, 1944, Allied troops landed at five Normandy beaches, preceded by massive naval and air bombardments and paratroop drops inland. For the troops who landed, it was a hard struggle as German defenders tried, and failed, to drive them back into the sea. The intricate planning and many individual acts of valor that made the Normandy landings a success ultimately paid off: less than a year later, Hitler was dead, and Germany had surrendered. In this incisive and dramatic account, historian Martin Gilbert brings this epic invasion to life. Drawing on an incredible range of materials and with the help of 28 maps prepared especially for this book, he provides new information on the intricate preparations for Operation Overlord, especially the setbacks, squabbles, and the high level of secrecy surrounding elaborate deceptions designed to convince the Germans that the landings would be somewhere far from Normandy. He provides new details of how the Allies penetrated German planning to defend against the invasion. For D-Day itself, he captures the confusion, horror, and heroism through new vivid firsthand accounts. Takin