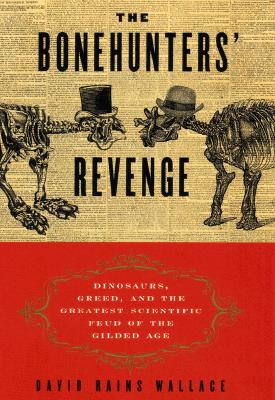 The Bonehunters' Revenge: Dinosaurs, Greed, and the Greatest Scientific Feud of the Gilded Age

When dinosaur fossils were first discovered in the Wild West, they sparked one of the greatest scientific battles in American history. Over the past century it's been known by many names -- the Bone War, the Fossil Feud -- but the tragic story of the conflict between two leading paleontologists of the Gilded Age remains a prophetic tale of the conquest of the West, as well as a watershed event in science. Edward Drinker Cope was a Philadelphia Quaker from a wealthy family, an old-fashioned naturalist in the Jeffersonian tradition. Othniel Charles Marsh, a farm boy who had risen to a Yale professorship, was the model of a modern scientific entrepreneur. Opposites in personality and background as well as in political orientation and scientific beliefs, they fought over fossils as bitterly as other men fought over gold. With Indian wars swirling around them, they conducted their own personal warfare, staking out territories, employing scouts, troops, and spies. When James Gordon Bennett, the sociopathic publisher of the New York Herald, got wind of their feud, he stirred up an inferno that destroyed the lives of both men and scarred the reputations of many others, including John Wesley Powell, the director of the U.S. Geological Survey. In the aftermath, Powell's environmentally progressive ideas for limiting settlement of the West lost out to his opponents' laissez-faire boosterism, and the repercussions of the Bone War linger in many of the conflicts that rend the country today.

Title: The Bonehunters' Revenge: Dinosaurs, Greed, and the Greatest Scientific Feud of the Gilded Age

The Bonehunters' Revenge: Dinosaurs, Greed, and the Greatest Scientific Feud of the Gilded Age