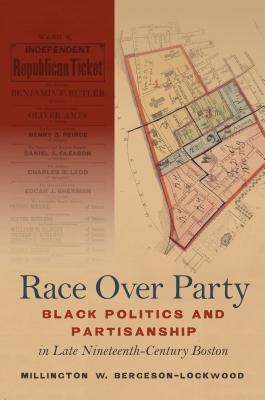 In late nineteenth-century Boston, battles over black party loyalty were fights over the place of African Americans in the post-Civil War nation. In his fresh in-depth study of black partisanship and politics, Millington W. Bergeson-Lockwood demonstrates that party politics became the terrain upon which black Bostonians tested the promise of equality in America's democracy. Most African Americans remained loyal Republicans, but Race Over Party highlights the actions and aspirations of a cadre of those who argued that the GOP took black votes for granted and offered little meaningful reward for black support. These activists branded themselves "independents," forging new alliances and advocating support of whichever candidate would support black freedom regardless of party.

By the end of the century, however, it became clear that partisan politics offered little hope for the protection of black rights and lives in the face of white supremacy and racial violence. Even so, Bergeson-Lockwood shows how black Bostonians' faith in self-reliance, political autonomy, and dedicated organizing inspired future generations of activists who would carry these legacies into the foundation of the twentieth-century civil rights movement.