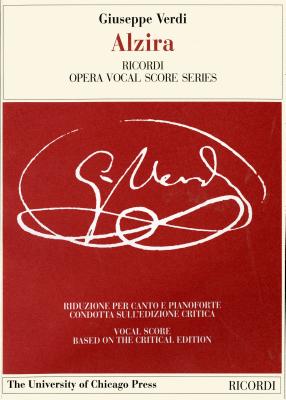 Like all of Verdi's operas from the 1840s, "Alzira" is to some extent an "experimental" opera, one of violent musical contrasts. Pieces closely reflecting the meaning of the words, and foreshadowing the works of Verdi's maturity, are set against numbers in more traditional forms, such as the cabaletta, charged with driving rhythmic energy. Prior to Castelvecchi and Cheskin's critical edition, no orchestral score of "Alzira" had ever been published; the rare manuscript versions that circulated after World War II were based on sources distant from the autograph, filled with musical and textual imprecisions. The critical edition--based both on the autograph score housing in the archives of Casa Ricordi and important secondary sources--rectifies those errors, and makes a reliable score of the opera available for the first time; the piano-vocal score offers a paperback edition derived from that definitive full score.

Description: 8875926964 Crisp, clean, unread book with some shelfwear and a remainder mark to one edge - NICE