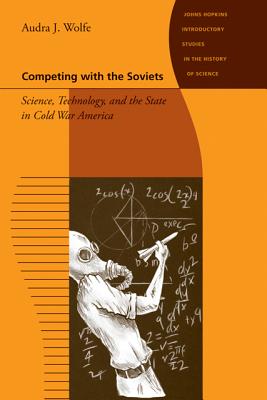 Competing with the Soviets: Science, Technology, and the State in Cold War America (Johns Hopkins Introductory Studies in the History of Science)

For most of the second half of the twentieth century, the United States and its allies competed with a hostile Soviet Union in almost every way imaginable except open military engagement. The Cold War placed two opposite conceptions of the good society before the uncommitted world and history itself, and science figured prominently in the picture. " Competing with the Soviets" offers a short, accessible introduction to the special role that science and technology played in maintaining state power during the Cold War, from the atomic bomb to the Human Genome Project.

The high-tech machinery of nuclear physics and the space race are at the center of this story, but Audra J. Wolfe also examines the surrogate battlefield of scientific achievement in such diverse fields as urban planning, biology, and economics; explains how defense-driven federal investments created vast laboratories and research programs; and shows how unfamiliar worries about national security and corrosive questions of loyalty crept into the supposedly objective scholarly enterprise.

Based on the assumption that scientists are participants in the culture in which they live, "Competing with the Soviets" looks beyond the debate about whether military influence distorted science in the Cold War. Scientists' choices and opportunities have always been shaped by the ideological assumptions, political mandates, and social mores of their times. The idea that American science ever operated in a free zone outside of politics is, Wolfe argues, itself a legacy of the ideological Cold War that held up American science, and scientists, as beacons of freedom in contrast to their peers in the Soviet Union. Arranged chronologically and thematically, the book highlights how ideas about the appropriate relationships among science, scientists, and the state changed over time.

Title: Competing with the Soviets: Science, Technology, and the State in Cold War America (Johns Hopkins Introductory Studies in the History of Science)

Description: 1421407698 Bumped and creased book with tears to the extremities, but not affecting the text block - GOOD

Competing with the Soviets: Science, Technology, and the State in Cold War America (Johns Hopkins Introductory Studies in the History of Science)