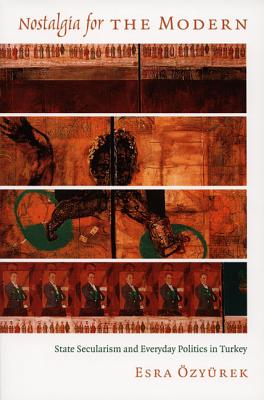 Nostalgia for the Modern: State Secularism and Everyday Politics in Turkey (Politics, History, and Culture)

As the twentieth century drew to a close, the unity and authority of the secularist Turkish state were challenged by the rise of political Islam and Kurdish separatism on the one hand and by the increasing demands of the European Union, the International Monetary Fund, and the World Bank on the other. While the Turkish government had long limited Islam--the religion of the overwhelming majority of its citizens--to the private sphere, it burst into the public arena in the late 1990s, becoming part of party politics. As religion became political, symbols of Kemalism--the official ideology of the Turkish Republic founded by Mustafa Kemal Ataturk in 1923--spread throughout the private sphere. In "Nostalgia for the Modern," Esra ozyurek analyzes the ways that Turkish citizens began to express an attachment to--and nostalgia for--the secularist, modernist, and nationalist foundations of the Turkish Republic.

Drawing on her ethnographic research in Istanbul and Ankara during the late 1990s, ozyurek describes how ordinary Turkish citizens demonstrated their affinity for Kemalism in the ways they organized their domestic space, decorated their walls, told their life stories, and interpreted political developments. She examines the recent interest in the private lives of the founding generation of the Republic, reflects on several privately organized museum exhibits about the early Republic, and considers the proliferation in homes and businesses of pictures of Ataturk, the most potent symbol of the secular Turkish state. She also explores the organization of the 1998 celebrations marking the Republic's seventy-fifth anniversary. ozyurek's insights into how state ideologies spread through private and personal realms of life have implications for all societies confronting the simultaneous rise of neoliberalism and politicized religion.

Title: Nostalgia for the Modern: State Secularism and Everyday Politics in Turkey (Politics, History, and Culture)

Nostalgia for the Modern: State Secularism and Everyday Politics in Turkey (Politics, History, and Culture)