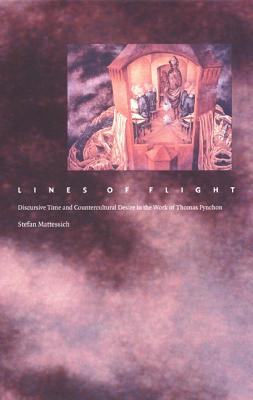 Lines of Flight: Discursive Time and Countercultural Desire in the Work of Thomas Pynchon (Post-Contemporary Interventions)

For Thomas Pynchon, the characteristic features of late capitalism--the rise of the military-industrial complex, consumerism, bureaucratization and specialization in the workplace, standardization at all levels of social life, and the growing influence of the mass media--all point to a transformation in the way human beings experience time and duration. Focusing on Pynchon's novels as representative artifacts of the postwar period, Stefan Mattessich analyzes this temporal transformation in relation not only to Pynchon's work but also to its literary, cultural, and theoretical contexts.
Mattessich theorizes a new kind of time--subjective displacement--dramatized in the parody, satire, and farce deployed through Pynchon's oeuvre. In particular, he is interested in showing how this sense of time relates to the counterculture of the 1960s and 1970s. Examining this movement as an instance of flight or escape and exposing the beliefs behind it, Mattessich argues that the counterculture's rejection of the dominant culture ultimately became an act of self-cancellation, a rebellion in which the counterculture found itself defined by the very order it sought to escape. He points to parallels in Pynchon's attempts to dramatize and enact a similar experience of time in the doubling-back, crisscrossing, and erasure of his writing. Mattessich lays out a theory of cultural production centered on the ethical necessity of grasping one's own susceptibility to discursive forms of determination.

Lines of Flight: Discursive Time and Countercultural Desire in the Work of Thomas Pynchon (Post-Contemporary Interventions)