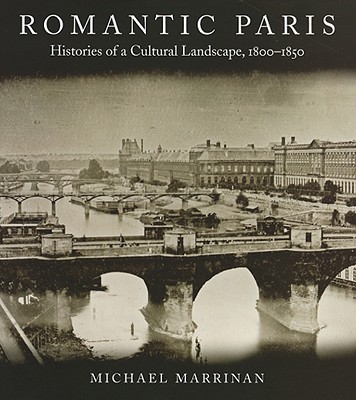 "Romantic Paris" is a richly illustrated survey of cultural life in Paris during some of the most tumultuous decades of the city's history. Between the coups d'etat of Napoleon Bonaparte and of his nephew, Louis-Napoleon, Paris weathered extremes of political and economic fortune. Once the shining capital of a pan-European empire, it was overrun by foreign armies. Projects for grand public works were delayed and derailed by plague, armed uprisings, and civil war.
At the same time, Paris was the theater of a revolution in the arts that challenged classical culture by depicting the vagaries of contemporary life and the thrill of unbridled experimentation. "Romantic Paris" produced Delacroix's "Liberty Leading the People" and Courbet's "Burial at Ornans." It was both the setting and inspiration for Hugo's "Les Miserables" and "The Hunchback of Notre-Dame." Meyerbeer's "Robert le Diable" set new standards for operatic productions, and audiences thrilled to the virtuoso performances of Paganini and Liszt, Talma and Taglioni. Established patterns of living, eating, dressing, and sociability were retooled for new urban spaces, new modes of personal mobility, and new forms of public self-presentation.
The cultural legacy of Romantic Paris includes a museum that shelters fragments rescued from the rubble of the Revolution, as well as the display of masterpieces, open to one and all, that we visit today as the Louvre.. In addition, this period contributed an architectural legacy that now gives Paris its distinct and world-renowned reputation as a cultural and artistic center. In "Romantic Paris, " Michael Marrinan plots the zigzag trajectory of the monuments, spaces, and habits of a city that looks both to the past and the future with all the optimism, self-doubts, and creative energy of a culture poised at the threshold of modernity.

Description: 0804761515 Crisp, clean, unread book with some shelfwear and a remainder mark to one edge - NICE