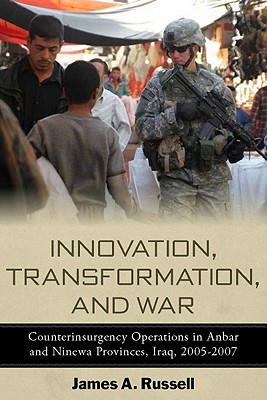 Within a year of President George W. Bush announcing the end of major combat operations in Iraq in May 2003, dozens of attacks by insurgents had claimed hundreds of civilian and military lives. Through 2004 and 2005, accounts from returning veterans presaged an unfolding strategic debacle--potentially made worse by U.S. tactics being focused on extending conventionally oriented military operations rather than on adapting to the insurgency.
By 2007, however, a sea change had taken place, and some U.S. units were integrating counterinsurgency tactics and full-spectrum operations to great effect. In the main, the government and the media cited three factors for having turned the tide on the battlefield: the promulgation of a new joint counterinsurgency doctrine, the "surge" in troop numbers, and the appointment of General David Petraeus as senior military commander.
James Russell, however, contends that local security had "already" improved greatly in Anbar and Ninewah between 2005 and 2007 thanks to the innovative actions of brigade and company commanders--evidenced most notably in the turning of tribal leaders against Al Qaeda. In "Innovation, Transformation, and War," he goes behind the headlines to reveal--through extensive field research and face-to-face interviews with military and civilian personnel of all ranks--how a group of Army and Marine Corps units successfully innovated in an unprecedented way: from the bottom up as well as from the top down. In the process they transformed themselves from organizations structured and trained for conventional military operations into ones with a unique array of capabilities for a full spectrum of combat operations. As well as telling an inspiring story, this book will be an invaluable reference for anyone tasked with driving innovation in any kind of complex organization.

Description: 0804773106 Crisp, clean, unread book with some shelfwear and a remainder mark to one edge - NICE