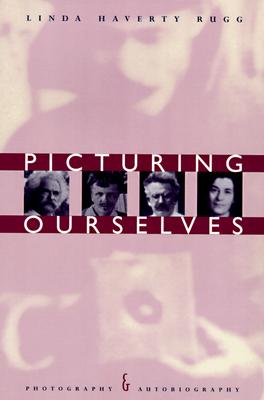 Picturing Ourselves: Photography and Autobiography

Photography has transformed the way we picture ourselves. Although photographs seem to "prove" our existence at a given point in time, they also demonstrate the impossibility of framing our multiple and fragmented selves. As Linda Haverty Rugg convincingly shows, photography's double take on self-image mirrors the concerns of autobiographers, who see the self as simultaneously divided (in observing/being) and unified by the autobiographical act.
Rugg tracks photography's impact on the formation of self-image through the study of four literary autobiographers concerned with the transformative power of photography. Obsessed with self-image, Mark Twain and August Strindberg both attempted (unsuccessfully) to integrate photographs into their autobiographies. While Twain encouraged photographers, he was wary of fakery and kept a fierce watch on the distribution of his photographic image. Strindberg, believing that photographs had occult power, preferred to photograph himself.
Because of their experiences under National Socialism, Walter Benjamin and Christa Wolf feared the dangerously objectifying power of photographs and omitted them from their autobiographical writings. Yet Benjamin used them in his photographic conception of history, which had its testing ground in his often-ignored "Berliner Kindheit um 1900." And Christa Wolf's narrator in "Patterns of Childhood" attempts to reclaim her childhood from the Nazis by reconstructing mental images of lost family photographs.
Confronted with multiple and conflicting images of themselves, all four of these writers are torn between the knowledge that texts, photographs, and indeed selves are haunted by undecidability and the desire for the returned glance of a single self.

Title: Picturing Ourselves: Photography and Autobiography

Description: 0226731472 Crisp, clean, unread book with some shelfwear and a remainder mark to one edge - NICE

Picturing Ourselves: Photography and Autobiography