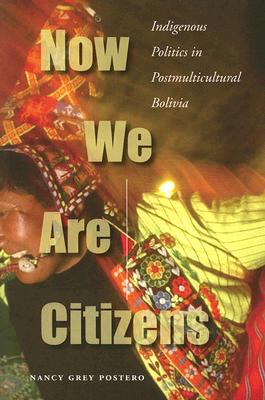 Now We Are Citizens: Indigenous Politics in Postmulticultural Bolivia

Upon winning the 2005 presidential election, Evo Morales became the first indigenous person to lead Bolivia since the arrival of the Spanish more than five hundred years before. Morales's election is the culmination of a striking new kind of activism in Bolivia. Born out of a history of resistance to colonial racism and developed in collective struggles against the post-revolutionary state, this movement crystallized over the last decade as poor and Indian Bolivian citizens engaged with the democratic promises and exclusions of neoliberal multiculturalism.
This ethnography of the Guarani Indians of Santa Cruz traces how recent political reforms, most notably the Law of Popular Participation, recast the racist exclusions of the past, and offers a fresh look at neoliberalism. Armed with the language of citizenship and an expectation of the rights citizenship implies, this group is demanding radical changes to the structured inequalities that mark Bolivian society. As the 2005 election proved, even Bolivia's most marginalized people can reform fundamental ideas about the nation, multiculturalism, neoliberalism, and democracy.

Title: Now We Are Citizens: Indigenous Politics in Postmulticultural Bolivia

Description: 0804755205 Bumped and creased book with tears to the extremities, but not affecting the text block and a remainder mark to one edge - Good

Now We Are Citizens: Indigenous Politics in Postmulticultural Bolivia