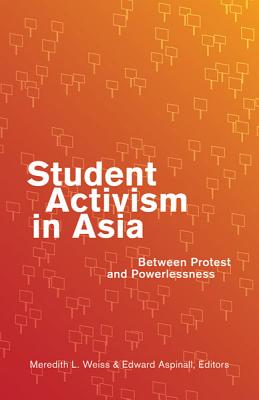 Student Activism in Asia: Between Protest and Powerlessness

Since World War II, students in East and Southeast Asia have led protest movements that toppled authoritarian regimes in countries such as Indonesia, South Korea, and Thailand. Elsewhere in the region, student protests have shaken regimes until they were brutally suppressed--most famously in China's Tiananmen Square and in Burma. But despite their significance, these movements have received only a fraction of the notice that has been given to American and European student protests of the 1960s and 1970s. The first book in decades to redress this neglect, "Student Activism in Asia" tells the story of student protest movements across Asia.

The authors include leading specialists on student activism in each of the countries investigated. Together, these experts provide a rich picture of an important tradition of political protest that has ebbed and flowed but has left indelible marks on Asia's sociopolitical landscape.

Title: Student Activism in Asia: Between Protest and Powerlessness

Description: 081667969X Crisp, clean, unread book with some shelfwear and a remainder mark to one edge - NICE

Student Activism in Asia: Between Protest and Powerlessness