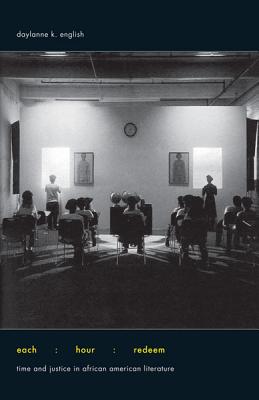 "Each Hour Redeem" advances a major reinterpretation of African American literature from the late eighteenth century to the present by demonstrating how its authors are centrally concerned with racially different experiences of time. Daylanne K. English argues that, from Phillis Wheatley to Suzan-Lori Parks, African American writers have depicted distinctive forms of temporality to challenge racial injustices supported by dominant ideas of time. The first book to explore the representation of time throughout the African American literary canon, "Each Hour Redeem" illuminates how the pervasive and potent tropes of timekeeping provide the basis for an overarching new understanding of the tradition.

Combing literary, historical, legal, and philosophical approaches, "Each Hour Redeem" examines a wide range of genres, including poetry, fiction, drama, slave narratives, and other forms of nonfiction. English shows that much of African American literature is characterized by "strategic anachronism," the use of prior literary forms to investigate contemporary political realities, as seen in Walter Mosley's recent turn to hard-boiled detective fiction. By contrast, "strategic presentism" is exemplified in the Black Arts Movement and the Harlem Renaissance and their investment in contemporary political potentialities, for example, in Langston Hughes and Amiri Baraka's adaptation of the jazz of their eras for poetic form and content. Overall, the book effectively demonstrates how African American writers have employed multiple and complex conceptions of time not only to trace racial injustice but also to help construct a powerful literary tradition across the centuries.

Description: 0816679908 Crisp, clean, unread book with some shelfwear and a remainder mark to one edge - NICE