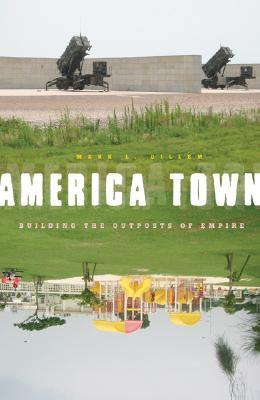 American servicemen and -women are currently stationed in more than 140 countries from Central America to Western Europe to the Middle East, often living and working on military bases that not only dominate foreign territories but also re-create familiar space that "feels like home"--gated communities filled with rambling subdivisions, franchised restaurants, and lush golf courses. In "America Town, " Mark Gillem reveals modern military outposts as key symbols of not just American power but also consumer consumption. Through case studies of several U.S. military facilities--including Aviano Air Base in Italy, Osan and Kunsan Air Bases in South Korea, and Kadena Air Base in Japan--Gillem exposes these military installations as exports of the American Dream, as suburban culture replicated in the form of vast green lawns, three-car garages, and big-box stores. With passion and eloquence he questions the impact of this practice on the rest of the world, exposing the arrogance of U.S. consumption of foreign land. Gillem contends that current U.S. military policy for its overseas troops practices avoidance--relocating military bases to isolated but well-appointed compounds designed to prevent contact with the residents. He probes the policy directives behind base building that reproduce widely spaced, abundantly paved, and extensively manicured American suburbs, regardless of the host nation's terrain and culture or the impact on local communities living under empire's wings. Throughout "America Town, " Gillem demonstrates how the excesses of American culture are strikingly evident in the way that the U.S. military builds its outposts. The defense of the United States, he concludes, has led to the massive imposition of tract homes and strip malls on the world--creating mini-Americas that inhibit cultural understanding between U.S. troops and our allies abroad. Mark L. Gillem is assistant professor of architecture and landscape architecture at the University of Oregon. He is also a licensed architect, a certified planner, and a former active-duty U.S. Air Force officer.

Description: 0816649537 Crisp, clean, unread book with some shelfwear and a remainder mark to one edge - NICE