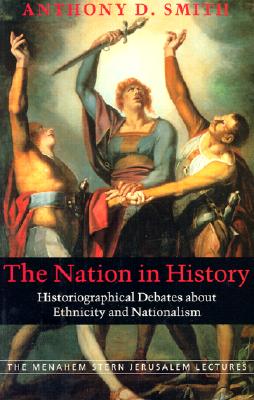 The Nation in History: Historiographical Debates about Ethnicity and Nationalism (The Menahem Stern Jerusalem Lectures)

In the first theoretical analysis of historiographical debates about ethnicity and nationalism, Anthony Smith provides a probing account of historians' assumptions and explanations of nationalism in different historical epochs. Ranging broadly over the contributions and divergent perspectives of historians, political scientists, sociologists, anthropologists and others who have contributed to these fundamental debates, Smith codifies the most cogent responses that have been offered to three defining issues in this area: the nature and origin of the nation and nationalism; the antiquity or modernity of nations and nationalism; and the role of nations and nationalism in historical, and especially recent, social change.
Using the examples of Persia, Israel, and Greece for long-term illustrations, Smith also discusses ethnic and national identities in France, Germany, England, Yugoslavia, and elsewhere to illuminate the uses and the meaning of alternative theories, and ends with a convincing case for the value of his own ethno-symbolist approach.

Title: The Nation in History: Historiographical Debates about Ethnicity and Nationalism (The Menahem Stern Jerusalem Lectures)

Description: 1584650400 Bumped and creased book with tears to the extremities, but not affecting the text block and a remainder mark to one edge - Good

The Nation in History: Historiographical Debates about Ethnicity and Nationalism (The Menahem Stern Jerusalem Lectures)