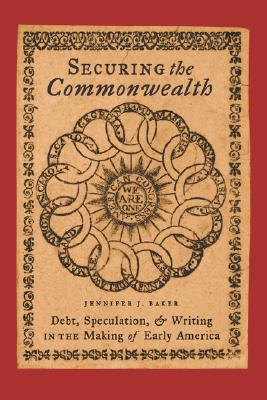 Securing the Commonwealth: Debt, Speculation, and Writing in the Making of Early America

"Securing the Commonwealth" examines how eighteenth-century American writers understood the highly speculative financial times in which they lived. Spanning a century of cultural and literary life, this study shows how the era's literature commonly depicted an American ethos of risk taking and borrowing as the peculiar product of New World daring and the exigencies of revolution and nation building.

Some of the century's most important writers, including Cotton Mather, Benjamin Franklin, Royall Tyler, Charles Brockden Brown, and Judith Sargent Murray, believed that economic and social commonwealth--and one's commitment to that commonwealth--might be grounded in indebtedness and financial insecurity. These writers believed a cash-poor colony or nation could not only advance itself through borrowing but also gain reputability each time it successfully paid off a loan. Equally important, they believed that debt could promote communality: precarious public credit structures could exact popular commitment; intricate financial networks could bind individuals to others and to their government; and indebtedness itself could evoke sympathy for the suffering of others.

Close readings of their literary works reveal how these writers imagined that public life might be shaped by economic experience, and how they understood the public life of literature itself. Insecure times strengthened their conviction that writing could be publicly serviceable, persuading readers to invest in their government, in their fellow Americans, and in the idea of America itself.

Title: Securing the Commonwealth: Debt, Speculation, and Writing in the Making of Early America

Description: 0801889693 Bumped and creased book with tears to the extremities, but not affecting the text block - GOOD

Securing the Commonwealth: Debt, Speculation, and Writing in the Making of Early America