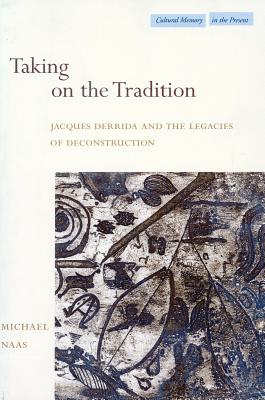 Taking on the Tradition: Jacques Derrida and the Legacies of Deconstruction (Cultural Memory in the Present)

"Taking on the Tradition" focuses on how the work of Jacques Derrida has helped us rethink and rework the themes of tradition, legacy, and inheritance in the Western philosophical tradition. It concentrates not only on such themes "in" the work of Derrida but also on his own gestures with regard to these themes--that is, on the performativity of Derrida's texts. The book thus uses Derrida's understanding of speech act theory to reread his own work.
The book consists in a series of close readings of Derrida's texts to demonstrate that the claims he makes in his work cannot be fully understood without considering the way he makes those claims. The book considers Derrida's relation to the Greek philosophical tradition and to his immediate predecessors in the French philosophical tradition, as well as his own legacy within the contemporary scene.
Part I examines Derrida's analyses of Plato and Aristotle on the themes of writing and metaphor. Part II looks at themes of donation, inheritance, pedagogy, and influence in relation to Derrida's readings of the works of Michel Foucault, Jacques Lacan, and Jean-Pierre Vernant. Part III considers the promises and legacies of Derrida's work on autobiography, friendship, and hospitality, themes Derrida has recently taken up in his readings of Martin Heidegger, Maurice Blanchot, and Emmanuel Levinas.
In the Conclusion, the author analyzes what Derrida has recently called a "messianicity without messianism" and shows how Derrida develops two different notions of the future and of legacy: one that always determines a horizon for the donation and reception of any legacy or tradition, and one that leaves open a radically unknown and unknowable future for that legacy and tradition.

Title: Taking on the Tradition: Jacques Derrida and the Legacies of Deconstruction (Cultural Memory in the Present)

Taking on the Tradition: Jacques Derrida and the Legacies of Deconstruction (Cultural Memory in the Present)