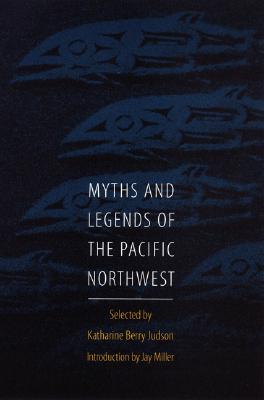 Myths and Legends of the Pacific Northwest

These collected myths and tales of the Indians of the Pacific Northwest--the Klamath, Nez Perce, Tillamook, Modoc, Shastan, Chinook, Flathead, Clatsop, and other tribes--were first published in 1910. Here are their stories concerning the creation of the universe, the theft of fire and daylight, the death and rebirth of salmon, and especially, the formation of such geographical features as The Dalles, the Columbia River, the Yukon River, and Mounts Shasta, Hood, Rainier, Baker, and Adams. Katharine Berry Judson began with native oral tradition in retelling these stories. They represent, as Jay Miller says, "a distillation of tribal memory and a personification of environmental wisdom." Some legends--"Duration of Life," "Old Grizzly and Old Antelope," and "Robe of Kemush"--are almost literal translations, recorded by government ethnologists. Animating the beautifully wrought tales are entities like Coyote, Old Man Above, Owl and Raven and other Animal People, and Chinook Ghosts.

Title: Myths and Legends of the Pacific Northwest

Description: 0803275951 Bumped and creased book with tears to the extremities, but not affecting the text block and a remainder mark to one edge - Good

Myths and Legends of the Pacific Northwest