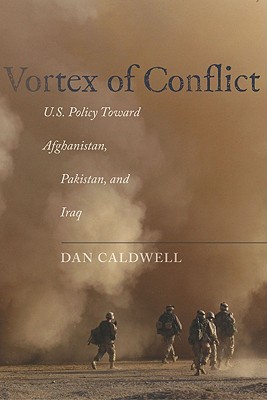 Vortex of Conflict: U.S. Policy Toward Afghanistan, Pakistan, and Iraq

More than two million Americans have now served in Afghanistan or Iraq; more than 5,000 Americans have been killed; and more than 35,000 have been grievously wounded. The war in Afghanistan has become America's longest war. Despite these facts, most Americans do not understand the background of, or reasons for, the United States' involvement in these two wars.
Utilizing an impressive array of primary and secondary sources, author Dan Caldwell describes and makes sense of the relevant historical, political, cultural, and ideological, elements related to the wars in Iraq and Afghanistan. Perhaps most importantly, he demonstrates how they are interrelated in a number of important ways.
Beginning with a description of the history of the two conflicts within the context of U.S. policies toward Afghanistan, Iraq, and Pakistan--because American policy toward terrorism and Afghanistan cannot be understood without some consideration of Pakistan--he outlines and analyzes the major issues of the two wars. These include intelligence quality, war plans, postwar reconstruction, inter-agency policymaking, U.S. relations with allies, and the shift from a conventional to counterinsurgency strategy. He concludes by capturing the lessons learned from these two conflicts and points to their application in future conflict.
"Vortex of Conflict" is the first, accessible, "one-volume resource" for anyone who wishes to understand why and how the U.S. became involved in these two wars--and in the affairs of Pakistan--concurrently. It will stand as the comprehensive reference work for general readers seeking a road map to the conflicts, for students looking for analysis and elucidation of the relevant data, and for veterans and their families seeking to better understand their own experience.

Description: 0804776660 Crisp, clean, unread book with some shelfwear and a remainder mark to one edge - NICE

Vortex of Conflict: U.S. Policy Toward Afghanistan, Pakistan, and Iraq