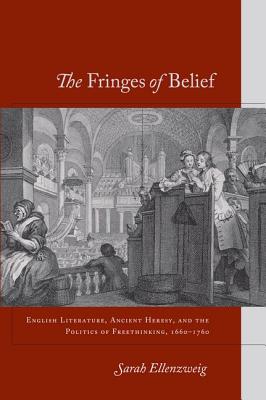 The Fringes of Belief: English Literature, Ancient Heresy, and the Politics of Freethinking, 1660-1760

"The Fringes of Belief" is the first literary study of freethinking and religious skepticism in the English Enlightenment. Ellenzweig aims to redress this scholarly lacuna, arguing that a literature of English freethinking has been overlooked because it unexpectedly supported aspects of institutional religion. Analyzing works by John Wilmot, Earl of Rochester, Aphra Behn, Jonathan Swift, and Alexander Pope, she foregrounds a strand of the English freethinking tradition that was suspicious of revealed religion yet often strongly opposed to the open denigration of Anglican Christianity and its laws. By exposing the contradictory and volatile status of categories like belief and doubt this book participates in the larger argument in Enlightenment studies--as well as in current scholarship on the condition of modernity more generally---that religion is not so simply left behind in the shift from the pre-modern to the modern world.

Title: The Fringes of Belief: English Literature, Ancient Heresy, and the Politics of Freethinking, 1660-1760

Description: 0804758778 Crisp, clean, unread book with some shelfwear and a remainder mark to one edge - NICE

The Fringes of Belief: English Literature, Ancient Heresy, and the Politics of Freethinking, 1660-1760