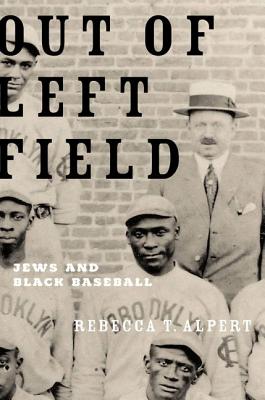 Out of Left Field: Jews and Black Baseball

Here is an eye-opening look at one of baseball's most intriguing and little known stories: the many-faceted relationship between Jews and black baseball in Jim Crow America.
In Out of Left Field, Rebecca Alpert explores how Jewish sports entrepreneurs, political radicals, and a team of black Jews from Belleville, Virginia called the Belleville Grays--the only Jewish team in the history of black baseball--made their mark on the segregated world of the Negro Leagues. Through in-depth research, Alpert tells the stories of the Jewish businessmen who owned and promoted teams as they both acted out and fell victim to pervasive stereotypes of Jews as greedy middlemen and hucksters. Some Jewish owners produced a kind of comedy baseball, akin to basketball's Harlem Globetrotters--indeed, Globetrotters owner Abe Saperstein was very active in black baseball--that reaped financial benefits for both owners and players but also played upon the worst stereotypes of African Americans and prevented these black "showmen" from being taken seriously by the major leagues. But Alpert also shows how Jewish entrepreneurs, motivated in part by the traditional Jewish commitment to social justice, helped grow the business of black baseball in the face of the oppressive Jim Crow restrictions, and how radical journalists writing for the Communist Daily Worker argued passionately for an end to baseball's segregation. In fact, the campaign to convince manager Branch Rickey to integrate the Brooklyn Dodgers was initiated by Daily Worker sports writer Bill Mardo, in an open letter in the paper.
Deftly written and meticulously researched, Out of Left Field offers a unique perspective on the economic and social negotiations between blacks and Jews in the first half of the 20th century, shedding new light on the intersection of race, religion, and sports in America.

Title: Out of Left Field: Jews and Black Baseball

Out of Left Field: Jews and Black Baseball