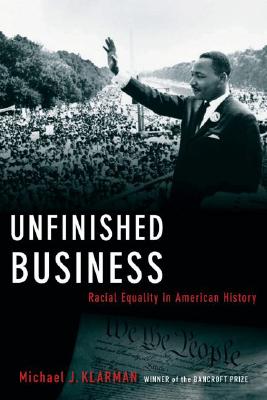 Michael J. Klarman, author of From Jim Crow to Civil Rights, which won the prestigious Bancroft Prize in American History, is one of the leading authorities on the history of civil rights law in the United States. In Unfinished Business, he illuminates the course of racial equality in America, revealing that we have made less progress than we like to think. Indeed, African Americans have had to fight for everything they have achieved.
Klarman highlights a variety of social and political factors that have influenced the path of racial progress--wars, migrations, urbanization, shifting political coalitions--and he looks in particular at the contributions of law and of court decisions to American equality. The author argues that court decisions tend to reflect the racial mores of the times, which is why the Supreme Court has not been a heroic defender of the rights of racial minorities. And even when the Court has promoted progressive racial change, its decisions have often been unenforced, in part because severely oppressed groups rarely have the resources necessary to force the issue. Klarman also sheds light on the North/South dynamic and how it has influenced racial progress, arguing that as southerners have become more anxious about outside challenges to their system of white supremacy, they have acted in ways that eventually undermined that system. For example, as southern slave owners demanded greater guarantees for slavery from the federal government, they alienated northerners, who came to fear a slave power conspiracy that would interfere with their liberties.
Unfinished Business offers an invaluable, succinct account of racial equality and civil rights throughout American history.