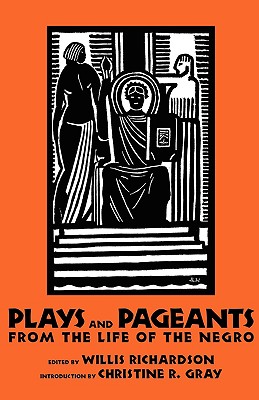 Plays and Pageants from the Life of the Negro

Here in a facsimile of the 1930 edition is Willis Richardson's collection of twelve plays and pageants that playwrights of the era wrote expressly for black audiences, mainly students and other young black people who staged them. Not available in any other source, this is the important work of nine significant dramatists who helped to lay the foundations of African American drama.

Included are Thelma Myrtle Duncan's "Sacrifice," Maud Cuney-Hare's "Antar of Araby," John Matheus's "Ti Yette," May Miller's "Graven Images" and "Riding the Goat," Willis Richardson's "The Black Horseman, ""The King's Dilemma, " and "The House of Sham, " Inez M. Burke's "Two Races, " Dorothy C. Guinn's "Out of the Dark, " Frances Gunner's "The Light of the Women, " and Edward J. McCoo's "Ethiopia at the Bar of Justice." This edition also contains Richardson's introduction from the 1930 edition, not included in later versions.

Title: Plays and Pageants from the Life of the Negro

Plays and Pageants from the Life of the Negro