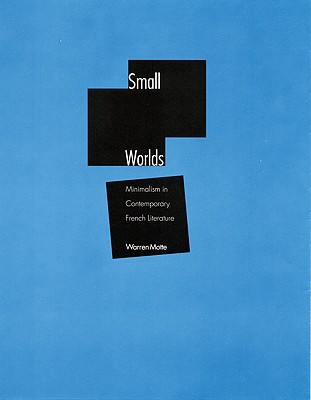 "Small Worlds" examines the minimalist trend in French writing, from the early 1980s to the present. Warren Motte first considers the practice of minimalism in other media, such as the plastic arts and music, and then proposes a theoretical model of minimalist literature. Subsequent chapters are devoted to the work of a variety of contemporary French writers and a diversity of literary genres. In his discussion of minimalism, Motte considers smallness and simplicity, a reduction of means (and the resulting amplification of effect), immediacy, directness, clarity, repetition, symmetry, and playfulness. He argues that economy of expression offers writers a way of renovating traditional literary forms and allows them to represent human experience more directly. Motte provides close readings of novels by distinguished contemporary French writers, including Edmond Jabes, Annie Ernaux, Herve Guibert, Marie Redonnet, Jean Echenoz, Olivier Targowla, and Emmanuele Bernheim, demonstrating that however diverse their work may otherwise be, they have all exploited the principle of formal economy in their writing.