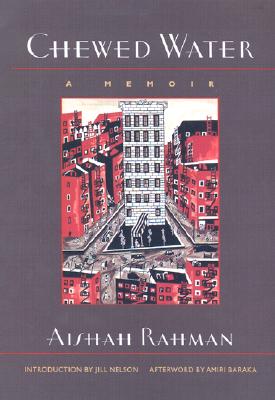 Playwright Aishah Rahman, born Virginia Hughes, has written a poignant account of events marking her first eighteen years growing up in Harlem as the foster child of a troubled woman. Chewed Water vividly weaves the complex relationship between a young girl and her foster mother in Harlem, while simultaneously evoking a vital neighborhood that still preserved some of the glory of the Harlem Renaissance at the same time that it was beginning to stumble under the burdens of racism, poverty, and drugs.
Born in Bermuda, Winnie Feral disdained her Harlem neighbors, West Indian and American alike. She began taking in foster children and when Virginia's mother, May Anna, could not reclaim her, Mrs. Feral nurtured her with one hand and beat her with the other, as neighbors, doctors, and social workers turned a blind eye. This memoir is in part a record of psychological and physical abuse that eventually gave birth to a desperate and self-destructive act of revenge.
It is also a coming-of-age story and an affectionate portrait of Harlem. Rahman beautifully conveys her own growing awareness of the world, her gradual understanding not only of the racism and sexism that set the boundaries of her life, but also of the lure of romance and the transcendent powers of art and literature. It was a time, she writes, when "muses walked in Harlem in the guise of ordinary mortals." She finds a mentor in the painter Norman Lewis; celebrates the installation of the new carillon in St. Martin's Church; learns of the old dreams of Marcus Garvey and the newer dreams of Paul Robeson; watches the first waves of a heroin crisis flood the streets of Harlem; and falls in love with Racine and Moliè re, who inspire her to take her own first steps in her career as a playwright.
Aishah Rahman's compelling memoir provides a clear understanding of the myriad forces -- familial and social -- that shape a life. Reminiscent of Angela's Ashes, Rahman's memoir fashions genuine beauty and inspiration from adifficult beginning.