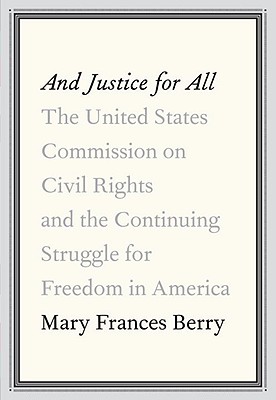 And Justice for All: The United States Commission on Civil Rights and the Continuing Struggle for Freedom in America

This is the story of the U.S. Commission on Civil Rights, through its extraordinary fifty years at the heart of the civil rights movement and the struggle for justice in America.
Mary Frances Berry, the commission's chairperson for more than a decade, author of "My Face Is Black Is True" ("An essential chapter in American history from a distinguished historian"--Nell Painter), tells of the commission's founding in 1957 by President Eisenhower, in response to burgeoning civil rights protests; how it was designed to be an independent bipartisan Federal agency--made up of six members, with no more than three from one political party, free of interference from Congress and presidents--beholden to no government body, with full subpoena power, and free to decide what it would investigate and report on.
Berry writes that the commission, rather than producing reports that would gather dust on the shelves, began to hold hearings even as it was under attack from Southern segregationists. She writes how the commission's hearings and reports helped the nonviolent protest movement prick the conscience of the nation then on the road to dismantling segregation, beginning with the battles in Montgomery and Little Rock, the sit-ins and freedom rides, the March on Washington.
We see how reluctant government witnesses and local citizens overcame their fear of reprisal and courageously came forward to testify before the commission; how the commission was instrumental in passing the Civil Rights Act of 1964 and the Voting Rights Act of 1965; how Congress soon added to the commission's jurisdiction the overseeing of discriminating practices--with regard to sex, age, and disability--which helped in the enactment of the Age Discrimination Act of 1978 and the Americans With Disabilities Act of 1990.
Berry writes about how the commission's monitoring of police community relations and affirmative action was fought by various U.S. presidents, chief among them Ronald Reagan and George W. Bush, each of whom fired commissioners who disagreed with their policies, among them Dr. Berry, replacing them with commissioners who supported their ideological objectives; and how these commissioners began to downplay the need to remedy discrimination, ignoring reports of unequal access to health care and employment opportunities.
Finally, Dr. Berry's book makes clear what is needed for the future: a reconfigured commission, fully independent, with an expanded mandate to help oversee all human rights and to make good the promise of democracy--equal protection under the law regardless of race, color, sexual orientation, religion, disability, or national origin.

Title: And Justice for All: The United States Commission on Civil Rights and the Continuing Struggle for Freedom in America

And Justice for All: The United States Commission on Civil Rights and the Continuing Struggle for Freedom in America