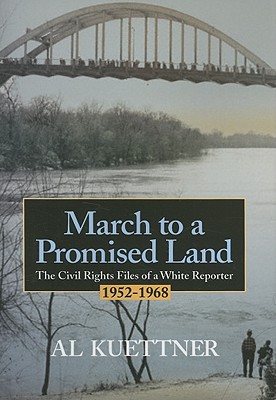 March To A Promised Land: The Civil Rights Files of a White Reporter 1952-1968 (Capital Currents)

Al Kuettner was a young, white Southern reporter when the civil rights struggle began in 1952, the year he was assigned to cover it by the wire service United Press. During those turbulent years that followed he traveled extensively throughout the U.S., talking with hundreds of people, black and white, witnessing the events that transformed American race relations. Kuettner covered all the key events the integration of the South s public schools and universities; Rosa Parks and her famous bus ride; the great civil rights marches on Washington, D.C. and Montgomery, Alabama; the passage of the landmark Supreme Court rulings and civil rights and voting legislation; the assassinations of Evers, King, and Kennedy. He knew and interviewed all the key players from Martin Luther King, Jr., whom he first met and interviewed in 1955 as a young preacher dressed in a blue work shirt and denims in the Sunday school room of the Dexter Avenue Baptist Church; to John Lewis, now a congressman, who in 1965 was attacked as he led marchers from Selma to Montgomery, Ala.; to Medgar Evers, who paid with his life for his work in the black voter registration campaign. He knew them all. Now in this book, Kuettner retraces his steps, reexamining the history he witnessed in the making, and questioning blacks and whites about the legacy of change. While he traces the events he witnessed, his vision is informed by the future and by his own determination to present the events honestly.This book is dedicated to the UPI reporters and photographers who covered the civil rights story.

Title: March To A Promised Land: The Civil Rights Files of a White Reporter 1952-1968 (Capital Currents)

March To A Promised Land: The Civil Rights Files of a White Reporter 1952-1968 (Capital Currents)