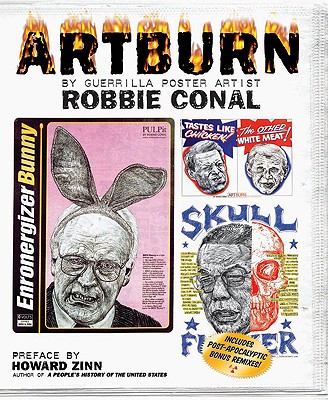 "I can say with absolute certainty that none of these -pictures are resident in the White House."--Sean Walsh, Official White House Spokesperson

"Artburn "is a collection of the best pages from the last five years of Robbie Conal's satirical monthly column in the "LA Weekly," updated with background factoids and secret war stories about his subjects, including the likes (and dislikes) of: Dubya, Dick Cheney, John Ashcroft, Rush Limbaugh, Bill, Hillary and Monica, Jerry Falwell and Pat Robertson, even Bill Gates, among others. Artburn includes production shots of the original pages Robbie and his midnight deadline crew perpetrated at the very alternative LA Weekly, and a chapter of images and voices of the denizens themselves. We've even thrown in a dozen late-night remixes that were too hot for the Weekly to print.

Robbie Conal grew up in New York City and became a stone-cold Hippie in San Francisco, landing in a storefront in the Haight Ashbury district in 1964. He did time in Connecticut--with time off for bad behavior in Soho--then moved to Los Angeles, where he now makes street posters and caricatures for the "LA Weekly," satirizing politicians of both parties, televangelists, media pundits and global capitalists. Robbie has gained national prominence as the country's premiere poster artist; his work has been featured on "CBS This Morning," "Charlie Rose," and in "Time, Newsweek, New York Times, Los Angeles Times, Washington Post, Wall Street Journal "and many other national publications. His first book, "Art Attack: The Midnight Politics of a Guerilla Artist," was published by HarperPerennial in 1992.