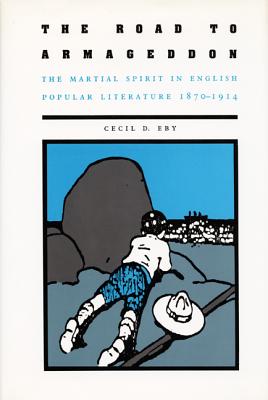 The Road to Armageddon: The Martial Spirit in English Popular Literature, 1870?1914

The Lost Generation has held the imagination of those who succeeded them, partly because the idea that modern war could be romantic, generous, and noble died with the casualties of that war. From this remove, it seems almost perverse that Britons, Germans, and Frenchmen of every social class eagerly rushed to the fields of Flanders and to misery and death.
In "The Road to Armageddon" Cecil Eby shows how the widely admired writers of English popular fiction and poetry contributed, at least in England, to a romantic militarism coupled with xenophobia that helped create the climate that made World War I seem almost inevitable.
Between the close of the Franco-Prussian War of 1871 and the opening guns of 1914, the works of such widely read and admired writers as H. G. Wells, Rudyard Kipling, J. M. Barrie, and Rupert Brooke, as well as a host of now almost forgotten contemporaries, bombarded their avid readers with strident warnings of imminent invasions and prophecies of the collapse of civilization under barbarian onslaught and internal moral collapse.
Eby seems these narratives as growing from and in turn fueling a collective neurosis in which dread of coming war coexisted with an almost loving infatuation with it. The author presents a vivid panorama of a militant mileau in which warfare on a scale hitherto unimaginable was largely coaxed into being by works of literary imagination. The role of covert propaganda, concealed in seemingly harmless literary texts, is memorably illustrated.

Title: The Road to Armageddon: The Martial Spirit in English Popular Literature, 1870?1914

The Road to Armageddon: The Martial Spirit in English Popular Literature, 1870?1914