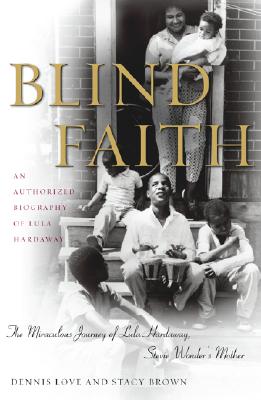 Hardship, sacrifice, determination, and ultimate triumph are the elements that make up "Blind Faith," the frank and compelling biography of Lula Hardaway, mother of superstar musician and singer Stevie Wonder. Written with her full cooperation and participation, this is the first ever authorized look into the life of the woman who gave birth to and nurtured one of America's greatest musicians/songwriters -- and the struggles that preceded his rise to fame and fortune.

To say that Lula Hardaway did not have an easy life is an understatement. It was a constant struggle for self-esteem and emotional survival. Yet survive she did -- a motherless child born in a sharecropper's shack in Alabama, she was passed from relative to relative, unwanted and, for the most part, unloved. As a teenager she was sent to Chicago, where she met a much older man whom she eventually married. Unfortunately, her life then took an even darker turn as he abused her and forced her to work as a prostitute. Determined to build a better life for her children, she started hiding money away, and one day successfully made her escape to Detroit.

One of her sons, Stevland Judkins, was blind from infancy. Although he presented special challenges, Lula noticed from the outset that this little boy impressed everyone he met with his outgoing personality, his intelligence, charm, and resourcefulness -- and his incredible musical talent. By age ten, he was playing and singing gospel tunes in church, and then joining adults singing rhythm and blues on the street corners of Detroit.

Eventually, word of this young phenomenon reached Berry Gordy, who was just beginning to establish himself as a creative force inDetroit's thriving music scene. Gordy dubbed the boy Little Stevie Wonder, and launched him into musical history when he signed him to his Motown label.

Stardom didn't come that easily -- there was the question of what material was best for Stevie, and then the question of what would happen to the twelve-year-old boy's voice when he reached puberty. Fortunately, the voice that emerged was even more musical and more captivating than it had been. Great care was taken in choosing his next projects and the result was a succession of top 10 -- and several number 1 -- hits.

By age twenty-one, Stevie had attained greater control of his career and finances by negotiating a new contract with Motown, which gave him complete control over the songs he recorded. What followed was a string of chart-topping albums and some of the most memorable popular music to come from the second half of the last century.

Through it all, Stevie Wonder never failed to credit his mother. When "Innervisions" won a Grammy award for Album of the Year in 1973, he refused to accept the award unless Lula would walk with him to the podium. He clutched his mother in front of the auditorium and in front of the millions of people watching on television, proclaiming, "Her strength has led us to this place."

Indeed, it was her strength and her belief in herself and in her sons that brought them to that place, to the very heights of success. It was her drive and her willingness to sacrifice the now for the future -- plus her abiding belief in God -- that saw them through. "Blind Faith" is not only the story of the birth of a superstar but also a stirring testament to a mother's love and determination and a frank anduncompromising look at how one woman's attempt to better her children's lives led to a lasting gift to the world.