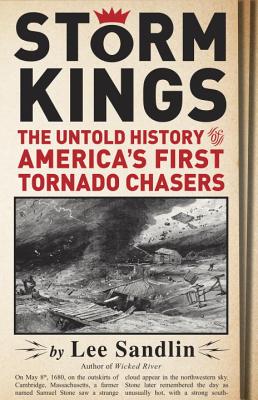 With 16 pages of black-and-white illustrations
From the acclaimed author of "Wicked River" comes "Storm Kings, "a riveting tale of supercell tornadoes and the quirky, pioneering, weather-obsessed scientists whose discoveries created the science of modern meteorology.
While tornadoes have occasionally been spotted elsewhere, only the central plains of North America have the perfect conditions for their creation. For the early settlers the sight of a funnel cloud was an unearthly event. They called it the "Storm King," and their descriptions bordered on the supernatural: it glowed green or red, it whistled or moaned or sang. In "Storm Kings, " Lee Sandlin explores America's fascination with and unique relationship to tornadoes. From Ben Franklin's early experiments to the "great storm war" of the nineteenth century to heartland life in the early twentieth century, Sandlin re-creates with vivid descriptions some of the most devastating storms in America's history, including the Tri-state Tornado of 1925 and the Peshtigo "fire tornado," whose deadly path of destruction was left encased in glass.
Drawing on memoirs, letters, eyewitness testimonies, and archives, Sandlin brings to life the forgotten characters and scientists who changed a nation--including James Espy, America's first meteorologist, and Colonel John Park Finley, who helped place a network of weather "spotters" across the country. Along the way, Sandlin details the little-known but fascinating history of the National Weather Service, paints a vivid picture of the early Midwest, and shows how successive generations came to understand, and finally coexist with, the spiraling menace that could erase lives and whole towns in an instant.