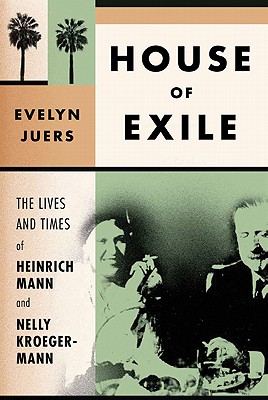 House of Exile: The Lives and Times of Heinrich Mann and Nelly Kroeger-Mann

In 1933 the author and political activist Heinrich Mann and his partner, Nelly Kroeger, fled Nazi Germany, finding refuge first in the south of France and later, in great despair, in Los Angeles, where Nelly committed suicide in 1944 and Heinrich died in 1950. Born into a wealthy middle-class family in Lubeck, Heinrich was one of the leading representatives of Weimar culture. Nelly was twenty-seven years younger, the adopted daughter of a fisherman and a hostess in a Berlin bar. As far as Heinrich's family was concerned, she was from the wrong side of the tracks. In "House of Exile," Heinrich and Nelly's story is crossed with others from their circle of friends, relatives, and contemporaries: Heinrich's brother, Thomas Mann; his sister, Carla; their friends Bertolt Brecht, Alfred Doblin, and Joseph Roth; and, beyond them, the writers James Joyce, Franz Kafka, and Virginia Woolf, among others. Evelyn Juers brings this generation of exiles to life with tremendous poignancy and imaginative power. In train compartments, ship cabins, and rented rooms, the Manns clung to what was left to them--their bodies, their minds, and their books--in a turbulent and self-destructive era.

Title: House of Exile: The Lives and Times of Heinrich Mann and Nelly Kroeger-Mann

House of Exile: The Lives and Times of Heinrich Mann and Nelly Kroeger-Mann