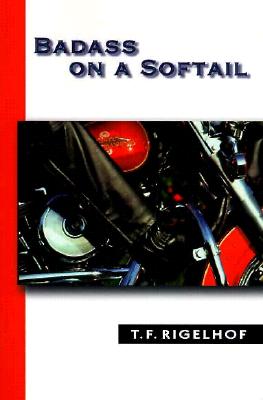 Badass on a Softail

As David Hoffer, 44, rides his Harley Davidson Heritage Softail south on the Laurentian Autoroute to a memorial for a friend who has died of prostate cancer, he worries that he may soon join his pal on the other side. His back is killing him, and he's got a pain in the rear end that just won't go away. Hoffer's pain in the butt may be non-medical. To finance new equipment for his music video production company, he has sold land adjoining his studio to the Children of the Sun, but he has learned that their religious activites don't consist of nude sunbathing. His affair with Roberta, half his age, is complicated by his attachment to his previous lover. His inner child (;more dopehead adolescent than squalling infant); is annoyed with him; so is his ex-wife; so is his business partner. So are some other people who don't like his style. Set in 1994 in the Laurentians where the Solar Temple cult was planning its apocalypse, Badass on a Softail is a culture-jamming fugue on what happens when the Age of Aquarius stares into the mirror and sees the Age of Acquisition staring back.

Title: Badass on a Softail

Badass on a Softail