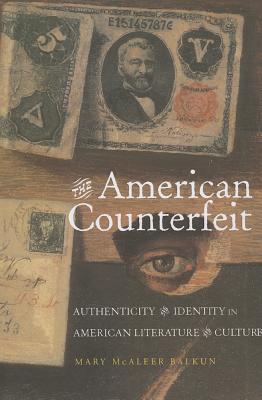 Fakery, authenticity, and identity in American literature and culture at the turn of the 20th century
Focusing on texts written between 1880 and 1930, Mary McAleer Balkun explores the concept of the "counterfeit," both in terms of material goods and invented identities, and the ways that the acquisition of objects came to define individuals in American culture and literature. Counterfeiting is, in one sense, about the creation of something that appears authentic--an invented self, a museum display, a forged work of art. But the counterfeit can also be a means by which the authentic is measured, thereby creating our conception of the true or real.When counterfeiting is applied to individual identities, it fosters fluidityin social boundaries and the games of social climbing and passing that have come to be representative of American culture: the Horatio Alger story, the con man or huckster, the social climber, the ethnically ambiguous.
Balkun provides new readings of traditional texts such as "The Great Gatsby," "Adventures of Huckleberry Finn," and "The House of Mirth," as well as readings of less-studied texts, such as Walt Whitman's "Specimen Days" and Nella Larsen's "Passing." In each of these texts, Balkun locates the presence of manufactured identities and counterfeit figures, demonstrating that where authenticity and consumerism intersect, the self becomes but another commodity to be promoted, sold, and eventually consumed.