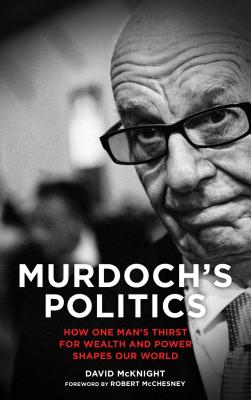 Murdoch's Politics: How One Man's Thirst For Wealth and Power Shapes our World

074533346X Crisp, clean, unread book with some shelfwear and a remainder mark to one edge - NICE

Rupert Murdoch's News Corporation is the most powerful media organization in the world. Murdoch's commercial success is obvious, but less well understood is his successful pursuit of political goals, using News Corporation as his vehicle.

In "Murdoch's Politics, " David McKnight tracks Murdoch's influence, from his support for Reagan and Thatcher, his deal with Tony Blair and attacks on Barack Obama. He examines the secretive corporate culture of News Corporation, its private political seminars for editors, its support for think tanks and its global campaigns on issues like Iraq and climate change.

Including analysis of the phone hacking crisis, possible bribery charges and Murdoch's appearance at the Leveson enquiry, this book is a highly topical study of one of the most influential and controversial figures of the modern age.

Title: Murdoch's Politics: How One Man's Thirst For Wealth and Power Shapes our World

Murdoch's Politics: How One Man's Thirst For Wealth and Power Shapes our World