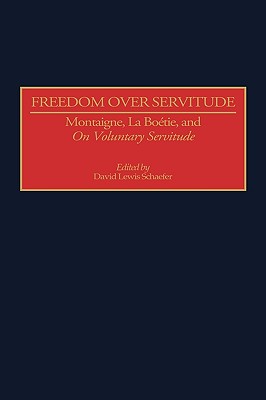 This volume contains five articles by prominent scholars of French literature and political philosophy that examine the relation between Montaigne's "EssayS," one of the classic works of the French philosophical and literary traditions, and the writings attributed by Montaigne to his friend, the French humanist Etienne de La Boetie's.

Three contributors to the volume suggest that Montaigne was the real author of the revolutionary tract "On Voluntary Servitude," along with the other works he attributed to La Boetie's. Two contributors describe the remarkable mathematical and/or mythological patterns found in both the "EssayS" and the works ascribed to La Boetie's. Several essays articulate the revolutionary political teaching found in the "EssayS" as well as "On Voluntary Servitude," challenging the conventional view of Montaigne as a political conservative. And all the contributors challenge the received view that he was an artless or nonchalant writer. The volume also includes new translations of both "On Voluntary Servitude" and the 29 Sonnets of Etienne de La Boetie that Montaigne included in all editions of the "EssayS" except the final one. An important work for students and scholars of political philosophy, Renaissance history, and French and comparative literature.