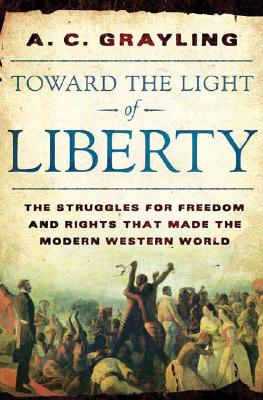 Toward the Light of Liberty: The Struggles for Freedom and Rights That Made the Modern Western World

The epic story of the interlocking struggles to achieve the individual rights and freedoms that characterize Western civilization, by one of the world's leading public intellectuals.
Perhaps the hallmark of western civilization over the past five hundred years, writes A. C. Grayling, is the series of liberation struggles without which the ordinary citizen in Western countries would not enjoy the rights and freedoms we now take for granted. They began with the often violent battle to allow independent thought, uncontrolled by the Church, which led in time to political freedom as monarchies were gradually replaced by more representative forms of government. These in turn made possible the abolition of slavery, rights for working men and women, universal education, the enfranchisement of women, and much more. Each of these struggles was a memorable human drama, and Grayling skillfully interweaves the stories of celebrated and little-known heroes alike--from Martin Luther and John Locke to the sixteenth-century French scholar Sebastien Castellio and the nineteenth-century feminist Elizabeth Cady Stanton. The triumphs and sacrifices of those who dared to oppose authority ring loudly down the ages, proving how hard-won each successive victory has been. And yet, as Grayling persuasively shows in a cautionary coda, democratic governments under pressure have often thought it necessary to restrict rights in the name of freedom, further underlining how precious they are. "Toward the Light of Liberty" is, thus, particularly relevant as we head toward an election season in which our own civil liberties will surely be an issue.

Title: Toward the Light of Liberty: The Struggles for Freedom and Rights That Made the Modern Western World

Toward the Light of Liberty: The Struggles for Freedom and Rights That Made the Modern Western World