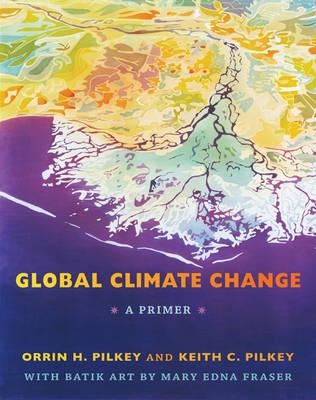 An internationally recognized expert on the geology of barrier islands, Orrin H. Pilkey is one of the rare academics who engages in public advocacy about science-related issues. He has written dozens of books and articles explaining coastal processes to lay readers, and he is a frequent and outspoken interviewee in the mainstream media. Here, the colorful scientist takes on climate change deniers in an outstanding and much-needed primer on the science of global change and its effects.

After explaining the greenhouse effect, Pilkey, writing with son Keith, turns to the damage it is causing: sea level rise, ocean acidification, glacier and sea ice melting, changing habitats, desertification, and the threats to animals, humans, coral reefs, marshes, and mangroves. These explanations are accompanied by Mary Edna Fraser's stunning batiks depicting the large-scale arenas in which climate change plays out.

The Pilkeys directly confront and rebut arguments typically advanced by global change deniers. Particularly valuable are their discussions of "Climategate," a manufactured scandal that undermined respect for the scientific community, and the denial campaigns by the fossil fuel industry, which they compare to the tactics used by the tobacco companies a generation ago to obfuscate findings on the harm caused by cigarettes.