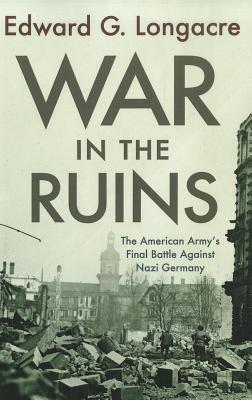 War in the Ruins: The American Army's Final Battle Against Nazi Germany

""War in the Ruins" has all the vivid narrative, historical context, and exacting military detail you would expect in a battle story. But author Edward G. Longacre's account of the Centurymen at Heilbronn is no sterile blow-by-blow from the 'war as chess game' genre. It is a fully fleshed-out portrait of young American men dealing with war's realities in one of World War II's fieriest and unjustly overlooked land battles."--JIM KUSHLAN, "America in WWII Magazine"

By April 1945, the last German counteroffensive in the west had been defeated, the vaunted Siegfried Line was no more, the Rhine River had been crossed, and major German cities were being bombed relentlessly. The war in Europe appeared to be in its final stages. As American and British armies overran central Germany, the Russians were smashing their way from the east toward Berlin. Optimism reigned up and down the Allied lines. But as the American Army's 100th Infantry Division pushed along the west bank of the Neckar River across from bomb-shattered Heilbronn, resistance unexpectedly stiffened. In that 700-year-old city, a major industrial and communications center still operating for the benefit of the Nazi war machine, Hitler's subordinates had battened down for a last-ditch stand. For sheer ferocity, it would exceed anything the now-battle-hardened Americans had experienced. Here, American troops faced a grueling campaign of house-to-house fighting, with Hitler Youth, Volkssturm militia, and an SS division attempting to stop the American advance at this critical sector of the European theater. Having been repeatedly targeted by Alllied aircraft, the city resembled a vast, Hellish ruin, and as American soldiers inched their way forward, they encountered booby traps, withering sniper fire, deadly Panzerfaust rounds, and a fanatical enemy. The nine-day battle for Heilbronn would be the last major combat for American troops in Europe. Within three weeks of their securing the city, Hitler would be dead and Germany defeated.

In "War in the Ruins: The American Army's Final Battle Against Nazi Germany," Edward G. Longacre recounts this neglected but essential chapter in the history of World War II, describing the 100th Division's swift but grueling advance through the Vosges Mountains, their Rhine River crossing, the assault on the historic Maginot Line, and the ominous approach to Heilbronn. The author then describes the entire bitter battle and its aftermath, using private letters, journals, German and American action reports, and other primary source material, to establish "War in the Ruins" as an essential volume in the history of World War II in Europe.

Title: War in the Ruins: The American Army's Final Battle Against Nazi Germany

Description: 1594161488 Crisp, clean, unread book with some shelfwear and a remainder mark to one edge - NICE

War in the Ruins: The American Army's Final Battle Against Nazi Germany