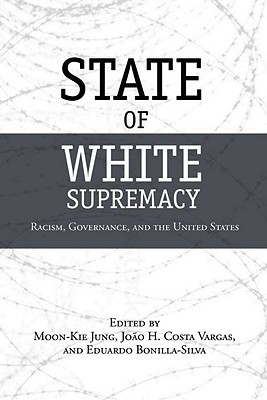 State of White Supremacy: Racism, Governance, and the United States

The deeply entrenched patterns of racial inequality in the United States simply do not square with the liberal notion of a nation-state of equal citizens. Uncovering the false promise of liberalism, "State of White Supremacy" reveals race to be a fundamental, if flexible, ruling logic that perpetually generates and legitimates racial hierarchy and privilege.
Racial domination and violence in the United States are indelibly marked by its origin and ongoing development as an empire-state. The widespread misrecognition of the United States as a liberal nation-state hinges on the twin conditions of its approximation for the white majority and its impossibility for their racial others. The essays in this book incisively probe and critique the U.S. racial state through a broad range of topics, including citizenship, education, empire, gender, genocide, geography, incarceration, Islamophobia, migration and border enforcement, violence, and welfare.

State of White Supremacy: Racism, Governance, and the United States