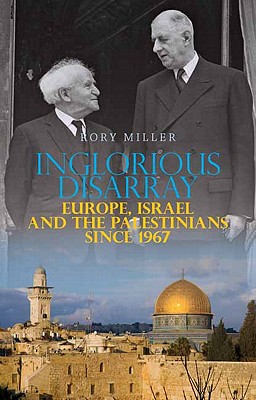 Inglorious Disarray: Europe, Israel, and the Palestinians Since 1967 (Columbia/Hurst)

Israel's victory over Arab states in the Six Day War of 1967 redrew the map of the Middle East. Ever since, Europe has struggled to establish some influence in the region. Largely, it has failed, often unable even to reach a consensus on how to act. Even when united, Europe's position rarely results in effective action, adding support ro German politician Joschka Fischer's assessment that "solving the Middle East and developing a real vision of peace is the major challenge for Europe."

"Inglorious Disarray" examines the disconnect between European rhetoric and action on the Middle East, tracing the power's confused and frequently frustrating involvement over the past half century. It follows Europe's shifting role and its effect on relationships with Israel, Palestinians, and the wider Arab world, not to mention Europe's Muslim population and the development of the European Union in the decades since inception.

Title: Inglorious Disarray: Europe, Israel, and the Palestinians Since 1967 (Columbia/Hurst)

Description: 0231702566 Crisp, clean, unread hardcover with light shelfwear to the dust jacket and a publisher's mark to one edge - Nice!

Inglorious Disarray: Europe, Israel, and the Palestinians Since 1967 (Columbia/Hurst)