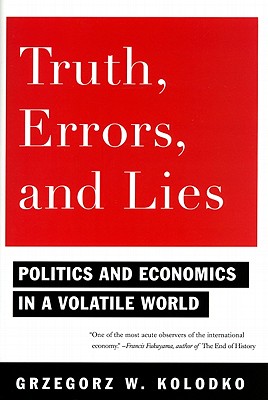 Truth, Errors, and Lies: Politics and Economics in a Volatile World

Grzegorz W. Kolodko, one of the world's leading authorities on economics and development policy and a key architect of Poland's successful economic reforms, applies his far-reaching knowledge to the past and future of the world economy, introducing a framework for understanding our global situation that transcends any single discipline or paradigm.

Deploying a novel mix of scientific evaluation and personal observation, Kolodko begins with a brief discussion of misinformation and its perpetuation in economics and politics. He criticizes the simplification of complex economic and social issues and investigates the link between developments in the global economy and cultural change, scientific discoveries, and political fluctuations. Underscoring the necessity of conceptual and theoretical innovation in understanding our global economic situation, Kolodko offers a provocative study of globalization and the possibility of coming out ahead in an era of worldwide interdependence. Deeply critical of neoliberalism, which sought to transfer economic control exclusively to the private sector, Kolodko explores the virtues of social-economic development and the new rules of the economic game. He concludes with a look at our near and distant future, questioning whether we have a say in its making.

Title: Truth, Errors, and Lies: Politics and Economics in a Volatile World

Description: 0231150687 Crisp, clean, unread hardcover with light shelfwear to the dust jacket and a publisher's mark to one edge - Nice!

Truth, Errors, and Lies: Politics and Economics in a Volatile World