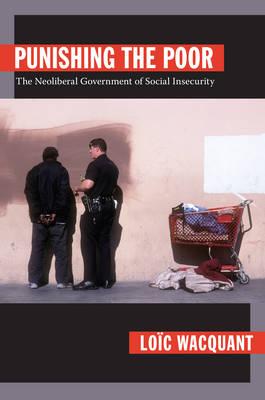 Punishing the Poor: The Neoliberal Government of Social Insecurity (Politics, History, and Culture)

The punitive turn of penal policy in the United States after the acme of the Civil Rights movement responds not to rising "criminal" insecurity but to the "social "insecurity spawned by the fragmentation of wage labor and the shakeup of the ethnoracial hierarchy. It partakes of a broader reconstruction of the state wedding restrictive "workfare" and expansive "prisonfare" under a philosophy of moral behaviorism. This paternalist program of penalization of poverty aims to curb the urban disorders wrought by economic deregulation and to impose precarious employment on the postindustrial proletariat. It also erects a garish theater of civic morality on whose stage political elites can orchestrate the public vituperation of deviant figures--the teenage "welfare mother," the ghetto "street thug," and the roaming "sex predator"--and close the legitimacy deficit they suffer when they discard the established government mission of social and economic protection. By bringing developments in welfare and criminal justice into a single analytic framework attentive to both the instrumental and communicative moments of public policy, "Punishing the Poor" shows that the prison is not a mere technical implement for law enforcement but a core political institution. And it reveals that the capitalist revolution from above called neoliberalism entails not the advent of "small government" but the building of an overgrown and intrusive penal state deeply injurious to the ideals of democratic citizenship.

Description: 0822344041 Crisp, clean, unread hardcover with light shelfwear to the boards, missing dust jacket, with a publisher's mark to one edge - Nice!

Punishing the Poor: The Neoliberal Government of Social Insecurity (Politics, History, and Culture)